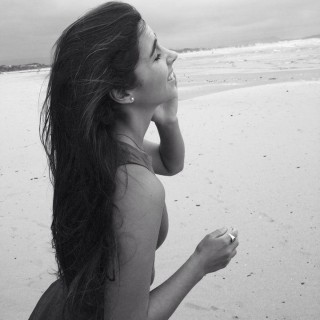 WE’RE used to seeing the grandest of sets from Mr Lagerfeld when it comes to a Chanel show (his supermarket sweep for ready-to-wear being one of his most memorable yet), but today this was all pared right back down for a space in the Grand Palais that was simply a white room accompanied by a virtual fireplace and a glass mirror over its mantelpiece.

But it was the ideal setting when it came to showing off Lagerfeld’s skills – this is a designer who is at his best when he does something very glamorous and slightly historical. So he gave us his Artful Dodger best for a collection that presented beautiful urchin girls who brought his 18th Century references (most noted in the regal embroidery of many a frock coat) right up to date with ribbon-tie flip-flop flats in place of last season’s couture trainers.

The girls took to the catwalk with quiffs and caps on the back of their heads and short pantaloons, which even came worn under little short suits and coats – this was a couture riff on a Charles Dickens classic from start to finish.

Everything was intricately embroidered or boasted sequins or crystals – across bodices, or jackets, smatterings of gold climbing up hems or clustering at collars, dancing around necklines and straps. The level of fabrication perfectly showed off the special couture skills that this house has at its disposal and it was a delight to see on display.

For cocktail attire there came a strong focus on trapeze shapes, gentle A-lines for skirts and dresses that spanned a palette of smoky greys (mimicked also in the make-up tones), off-white, pale gold, navy and black. Bags were like satchels and though used sparingly made for another clever modern note.

And while there won’t be a woman out there who wouldn’t not dream of stepping out in one of those serious gowns to end, we can’t help but know the real story here will end up being those flip-flop-style flats. Comfortable couture.